A fine spring day with breeding activity from many local birds in the lighthouse area including a pair of Skylarks which have taken up territory on Meols common behind the western groyne in spite of the hordes of dog walkers here every morning.
Migration is increasing with larger numbers of the common early spring migrants today. A total of 6 Swallows flew east and Wheatear numbers were up to 11, mainly in the paddocks and Meols common areas. Goldcrest numbers were up to 22 and Chiffchaffs to 17, these mainly in the nature trail and duckpond area although others were along Park Lane and the east bank of Kerr's field. Considering the clear conditions overnight and through the day these were decent numbers. Stonechats were down to just one bird, however. Their spring passage numbers tend to peak very early in the season, around mid March. Meadow Pipits were also down today, with just 20 or so birds being logged. 3 Buzzards were circling together over Kerr's field.
The month ahead is probably the best of the year in the Leasowe area with spring migration at full throttle. Hopefully many delights await.    Observers;  DH, TK, CT, EW

Migration continues to pick up a little.
The first 4 Swallows of the spring passed quickly through the lighthouse area today with 3 birds heading east along the embankment and the fourth west.
50 Meadow Pipits, 17 Pied and 1 White Wagtail were in the paddocks.
12 Goldcrests, 10 Chiffchaffs and 1 or 2 Willow Warblers were feeding up in the nature trail area prior to continuing their northerly journey.
3 Stonechats and 3 Wheatears were in the Meols common area.
Observers KAD, DH, JJ, CT.

A quiet morning in the Leasowe area with just a handful of migrants. 2 Sand Martins flew east along the sea embankment while 2 Wheatears were in the Meols common area. Wheatear passage here so far this spring has been both late and sparse. Hopefully numbers will pick up a bit and it's just down to the weather. Meadow Pipit numbers were well down today with just 20 being in the paddocks area and just a handful of overhead birds.
2 Chiffchaffs were grounded this morning. Things picked up in the early afternoon with a slight decrease in the wind and increase in temperature. This may have encouraged a small arrival of 6 Goldcrests, 9 Chiffchaffs and the first Willow Warbler of the spring. All these birds appeared together along the nature trail but quickly dispersed mainly westwards.
6 Skylarks also flew in off the sea and fed for a while in the paddocks before departing eastwards.
Other birds in the lighthouse area included a Peregrine flying west, 3 Reed Buntings on Lingham paddocks and a Kingfisher around the duck pond this morning.  Observers;  KAD, AE, DH, LH,CT, EW.

A single Short-eared Owl flew west across the paddocks west of the lighthouse this morning without lingering. A Merlin did linger here, however, and was perched on a fencepost for some time. There was no sign of it this afternoon though.
A pair of Scaup were on the sea off Leasowe over the high tide period.
Other migrants in the lighthouse area included 60 Meadow Pipits, mainly in the paddocks, 4 Goldcrests, 4 Redwings and 3 Chiffchaffs. One of the Chiffchaffs was in full song near the Duck pond and could be last year's returning breeder. Observers; JB, DH, TK, CT.

The first Wheatears of the spring finally arrived this morning with two males in the Lighthouse area, one on Meols common and the second along the sea embankment to the east. They are 8 days later than the first arrival here for last year and13 days later than the first for 2014. The average earliest arrival date for Cheshire and Wirral is 13th March.
There was a good passage of Meadow Pipits today with around 210 birds being logged, most passing through by midday but around 60 lingering in the paddocks this afternoon. Other migrants present in the lighthouse area included 2 Common Snipe, 5 Goldcrests, 4 Chiffchaffs, 8 Stonechats, 5 Redwings and a Grey Wagtail. A Kingfisher was seen along the Birkett from Lingham bridge while the Little Owl was heard constantly calling from just west of here from an area with no public access.
On the tide this morning off Leasowe were 800 Scoters, 235 Great-crested Grebes and a drake Scaup. 13 Wigeon  were on the sea off Dove point.
2 Short-eared Owls appeared this afternoon, one frequenting the paddocks before heading away inland and another arriving over the sea wall from the north-east and frequenting the Meols common area. Observers;  SD, AE, DH, JJ, MGT, EW

A Short-eared Owl spent most of the afternoon in the horse paddocks west of Leasowe lighthouse today giving prolonged perched views.
Migration continues at a trickle here with 2 Goldcrests in the area of the duck pond together with our first obvious migrant Chiffchaff of the spring, a bird with a ring on the right leg which could not be properly read (others may have more luck, see photo)
Around 20 Redwings were in the Park Lane area together with 2 more Goldcrests. Meadow Pipits continue to pass through in decent numbers with around 70 birds being logged, mainly in the paddocks and on the common in front of the lighthouse. 4 Stonechats are also in this area.

A cool day saw few new birds in at the Lighthouse today. A small flock of winter thrushes which included 20 Redwing and 30 Fieldfare were present on Pasture road. Stonechat numbers were up to 9 birds between Meols Common and Leasowe Bay.

4 Reed Bunting came in off the sea and 2 Goldcrest were along the nature trail. Offshore a herd of Whooper Swans were photographed very distantly from Leasowe Bay. 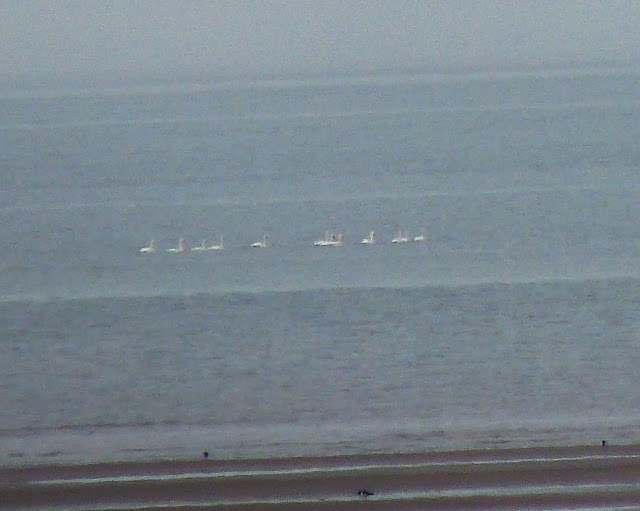 A Little Owl was calling this afternoon along Lingham Lane, Leasowe, although it has not been pinned down yet. Hopefully, as with last year others will be located.
2 'Ringtail' Hen Harriers, a Merlin and a Great White Egret were out on the saltmarsh off Neston. No wintering Rock Pipits were located here, however, indicating that they may have moved north which they tend to do early.
Water Pipits, however, continue to put on a show in the boggy field south of Neston sewage works. They can be viewed well from the field boundary and there is no need to squelch into the field to get nearer as they will flush, as one photographer who had not read his codebook found out today. There were three separate birds present here, two moulting and a third still in winter plumage. Another winter-plumaged Water Pipit was at the Old Quay freshwater stream. Large numbers of Meadow Pipits are passing through the area at the moment with over 70 logged.
The Firecrest remains in the bushes at the south-east corner of the sewage works and was showing well here occasionally this afternoon. It's best not to approach these bushes too closely, however, as Cetti's Warblers are thought to breed here and can be heard calling and occasionally singing. 4 Chiffchaffs and a Goldcrest were also in the area. 3 Stonechats are between the Old Quay and the Harp. Observers MGT EW

The very pale Chiffchaff remains in bushes at the south-east corner of Neston sewage works today but only put in a very brief appearance mid-afternoon. It's racial identity remains unclear as views and photographs have been inconclusive. It tends to hover frequently and also remains in the back of the bushes unlike the 7 or so other 'normal' collybita race birds also present. Some of these may be newly arrived migrants as their numbers are building up gradually with some in song.
A Cetti's Warbler was present here although calling much more than singing and only affording the briefest of glimpses. A Firecrest also appeared at midday and showed intermittently through the early afternoon. A winter plumaged Water Pipit was present in the boggy field to the south of the sewage works this morning. A separate bird was present around midday and into the afternoon. This was moulting into summer plumage and stood out like a sore thumb amongst the ten or so Meadow Pipits feeding with it. 4 Grey Wagtails were in the area and around 15 Redwing flew east over Denhall Quay.     Observers MGT, EW

2,500 Pink-footed Geese headed north-east over the embankment at Leasowe this morning. Offshore 110 Great-crested Grebes were on the flood tide together with 98 Common Scoter, 4 Teal and 4 Wigeon and 2 Scaup flew west.
The heavy Stonechat passage continues aided by ideal conditions with a total of 10 birds logged in the lighthouse area this morning, a good count. The Meadow Pipit passage continues to build up with 56 birds counted this morning in the paddocks along with an impressive 37 Pied Wagtails. Most of the Meadow Pipits had departed by early afternoon with many seen to head out north across Liverpool bay. A further 40 birds showed up in the Lingham Lane paddocks mid-afternoon, however. Most of the Stonechats had also dispersed by mid-afternoon also, leaving just 3 in the area. 6 Skylarks and 4 Song Thrush were also in the main paddocks. 3 Redwing were in fields off Park Lane, Meols, with a further 3 Song Thrushes. A flock of 240 Curlews was in fields inland from Park Lane.  Observers DH

A fine day with some noticeable early spring bird movements in the lighthouse area.
87 Pink-footed Geese flew north-west over the embankment in three groups and disappeared out over the sea towards North Wales. Offshore were around 1,000 Scoter. A drake Surf Scoter and 2 Slavonian Grebes were seen off Hoylake further west (per Rare Bird Alert)
The first obvious spring movement of passerines was also evident in the Leasowe area with around 50 Meadow Pipits present in the paddocks this morning. These moved off in the course of the day with many seen flying north-east over the embankment across Liverpool bay. 7 Stonechats were also present, 5 in the Meols Common area and 2 around Kerr's field (currently being transformed into more horse paddocks) Meadow Pipits and Stonechats are invariably the first spring migrants to start appearing here. Other birds in the Leasowe area included 6 Skylarks, 15 Pied Wagtails, 7 Reed Buntings and 30 Linnets. The Greenshank remains at the groyne.          Observers DH, EW.

Apologies; This update is a day late due to I.T. problems.
The regular wintering Greenshank was on Leasowe shore along with an interesting alba Wagtail which broadly appeared to be a White. Dark feather markings on the mantle, however, indicated some probable Pied infusion. Both races interbreed and some birds, as with this one, cannot be confidently assigned to race.
A ringtail Hen Harrier, a Merlin and a Greenshank were off Neston Old Quay. Inland were around 50 Redwings and a Chiffchaff. 3 Water Pipits were on the freshwater section of the marsh. There have been good numbers of this species recorded this winter with a minimum of 6 wintering between Denhall Quay and Parkgate. Birds have been recorded this winter from Burton Marsh north as far as Heswall so the true number of wintering birds must be far in excess of the two or three winterers reported in the Cheshire atlas. They will be colouring up into their attractive breeding plumage soon before departure in April.
Separated by habitat some of the Scandinavian (littoralis) Rock Pipits further out on the saltmarsh are already in fine breeding plumage and can now be identified as such. 4 were recorded and were, as always, extremely shy unlike rock-loving petrosus race birds. Observer EW.